Broga is a little godforsaken town; or beautiful sanctuary depending on how you look at it. Located right on the border of Selangor and Negeri Sembilan, it sits on the edges of Semenyih, where the bustling city slowly transforms before your eyes. As you head along the highways, you go from tall, modern skyscrapers to old, depilated shoplots, and finally, to a kampung with wooden buildings all around. Go a bit further in, and you’ll soon find yourself on a one lane road with only motorcycles to accompany you on it—and the odd chicken or cow, if you’re lucky.

At the end of the road, you’ll see ponds to your left and right—this is the Broga Recreational Fishing Park, where the Shi Shui Grilled Fish restaurant is located: 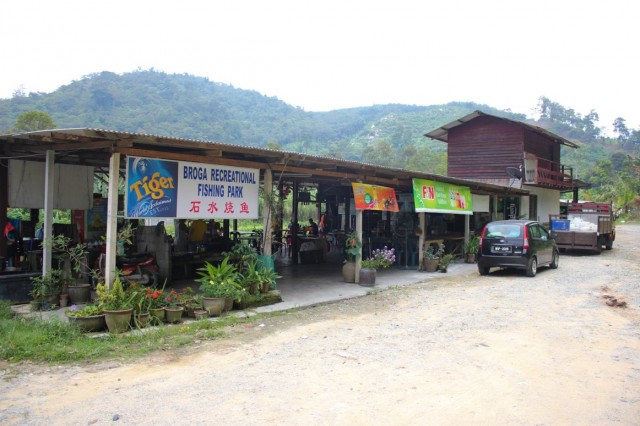 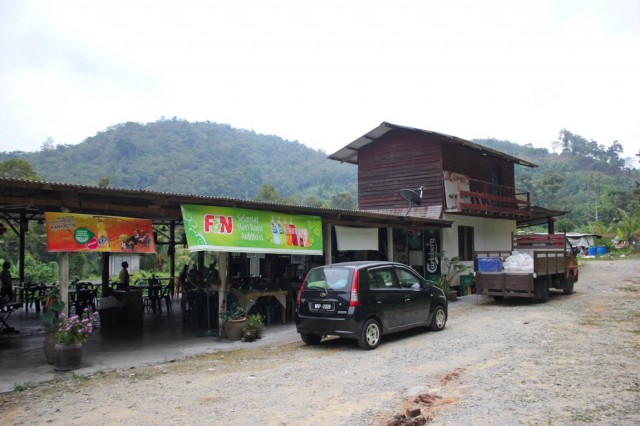 In addition to fishing, patrons can also have meals at this rustic, classically Southeast Asian restaurant. Everything here is stripped down and minimalistic—no fuss, no pretention. It’s a refreshing change from the upscale, expensive, and ridiculously overpriced restaurants that seem to be engulfing KL these days. It’s amazing that only 40 minutes out of the city centre, you’re able to find such a serene, unspoiled piece of wilderness. The surrounding areas are jungles—the air itself is void of the toxic fumes, dirt and dust that plague the urban areas.
This restaurant has a very concise and simple menu—you have a wide variety of fish dishes to choose from (only tilapia, but cooked in various ways), some meat and vegetable dishes. That’s it. I’ve recently become an ardent believer of the idea that having a small menu enables restaurants to really perfect them—it certainly holds true here. We ordered 3 fishes; one cooked in tom yum, one in their “original” spice, and one grilled in banana leaves. 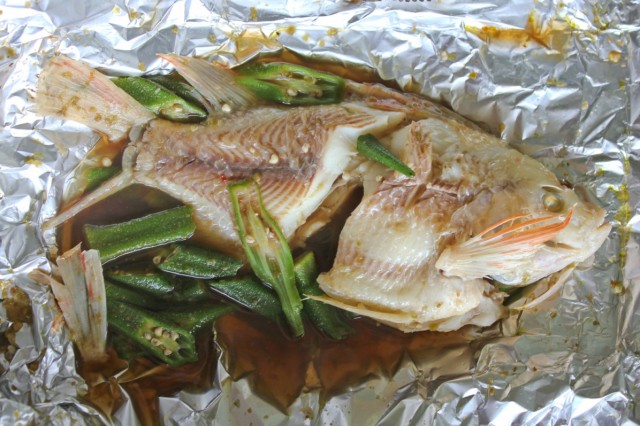 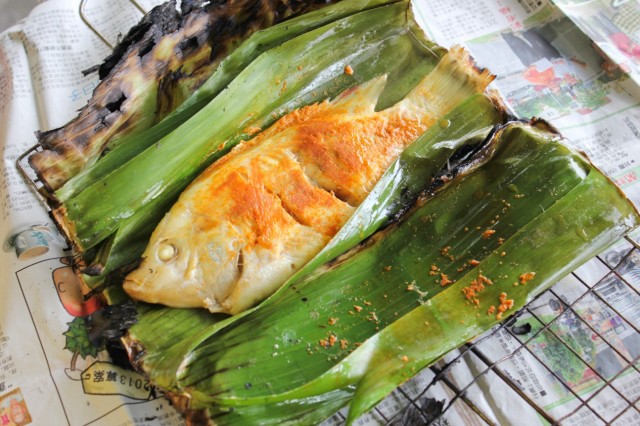 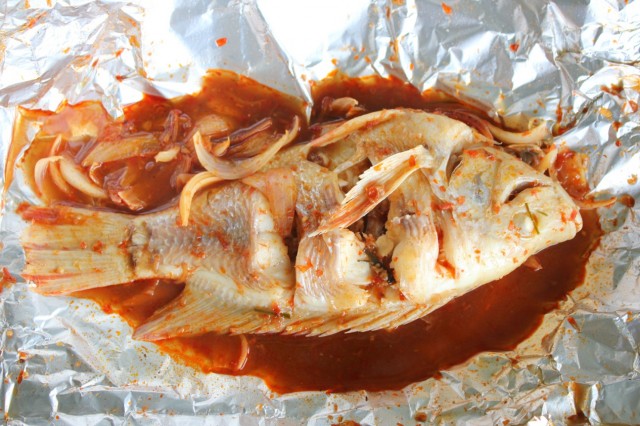 All the fishes are cooked the same way (except for the grilled one), wrapped in aluminium foil with the seasonings and sauces, and cooked on a charcoal flame: 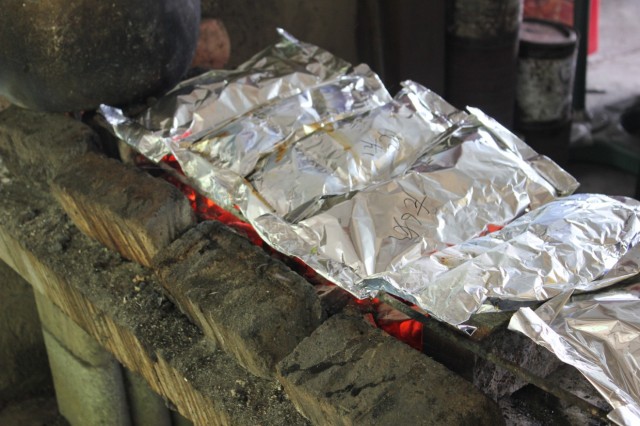 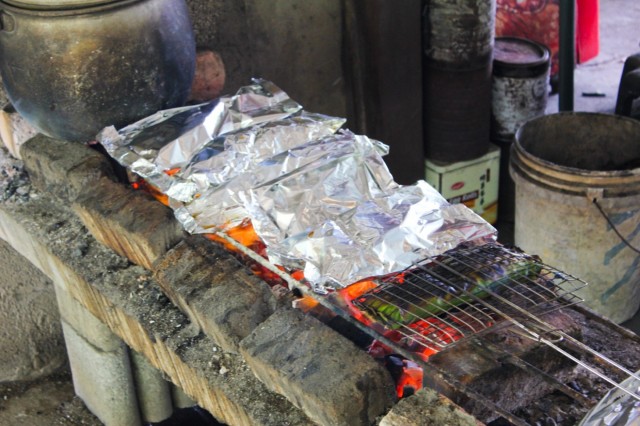 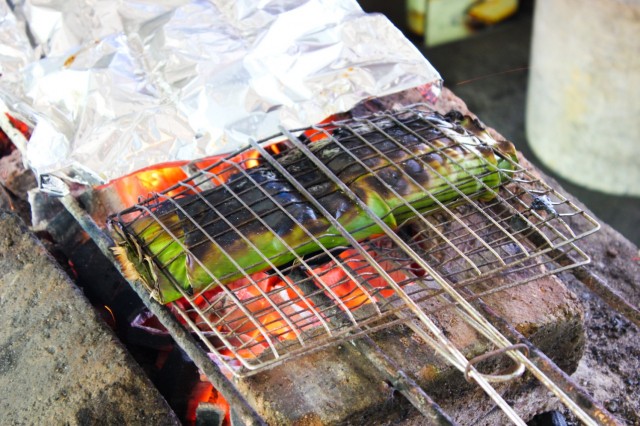 Honestly, we were not expecting very much, but were pleasantly surprised when we dug in! The fishes were incredibly fresh, did not have a trace of that “mud” taste that you usually get with pond or river fishes. We also ordered two veggie dishes in addition to the fish—ladies fingers and eggplant, as well as bamboo shoots cooked in curry. 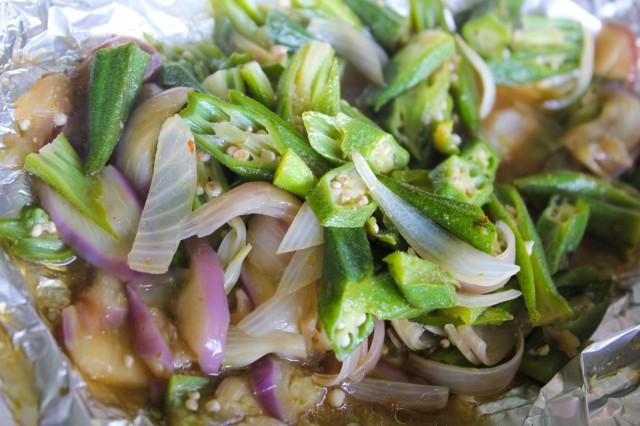 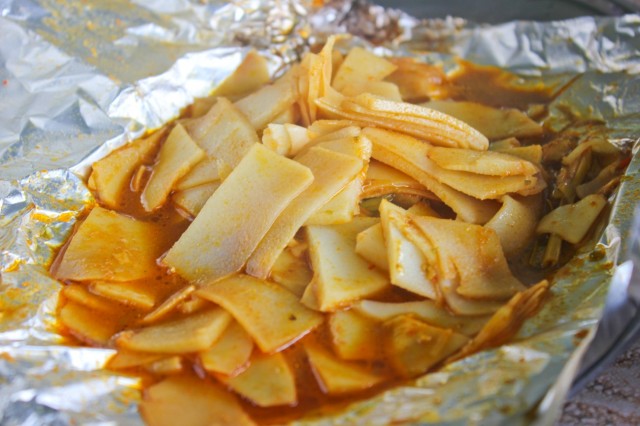 Was very impressed with the bamboo shoots—it’s always hard to find well cooked, fresh bamboo shoots around. It always irks me to taste spoiled bamboo (that is, it’s not fresh because it’s been sitting around for God knows how long), but people seem to love using them! With bamboo shoots, my belief is that if you CAN’T get it fresh so that it tastes good; don’t put any in at all.

Basically, that afternoon, we were a couple of big gluttons! 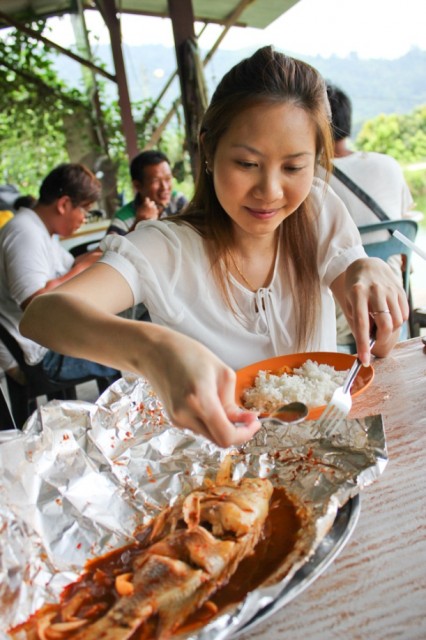 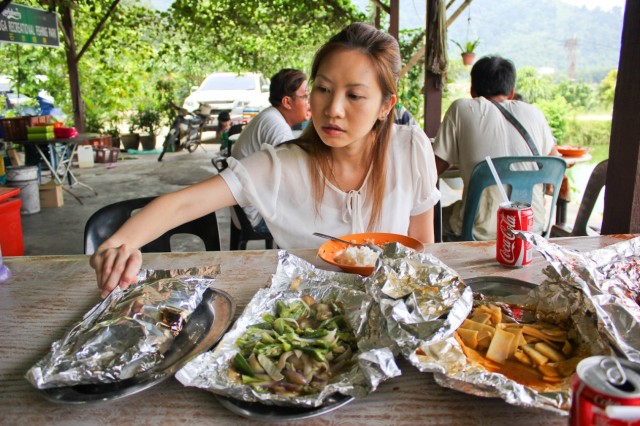 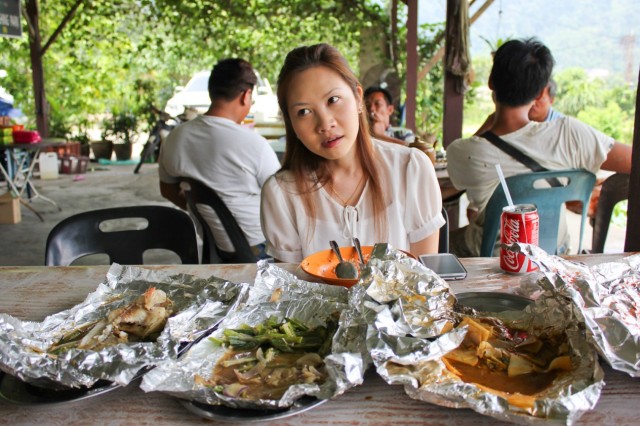 That’s me, trying to express how incredibly full I felt after gobbling up all that FOOD.

All in all, it was a very fun “road trip”, as I call it. I’d never been to Broga before, despite it being not that far out. We passed by many interesting things like a rabbit farm, a temple on the top of a hill (it came with a gigantic statue of the Monkey God, situated on a beautiful slope of the hill with well-manicured grass and shrubs), a morning market that turns into a coffee shop in the afternoon, and even a big restaurant called “Restaurant 69”.

So, if you’re ever looking for an adventure out of the city, or just want to get your hands on some fresh fish to eat while breathing in fresh air, head to Broga!

You are currently reading Adventure to Broga
Liked this Article? Share to your Friends!
Home Browse Restaurants Articles Events GoMakanTV
Find the best restaurants in Kuala Lumpur and the Klang Valley